It's a standard narrative.

An artsy (faux?)-intellectual teenager, who is also transgender, who never felt like he fit in. Who hated his peers and the world around him for years without knowing exactly why. A rebel without a cause.

I've never been interested in the same things as the people around me. Using Tumblr had me convinced I was special, or at the very least that I belonged to a group outside the mainstream. The further my life went, the more I felt like I was one of the few people who saw the bullshit for what it was - bullshit.

Of course, I've never really believed I was "special," deep down, or one of a kind. There's over 7 billion people on this Earth, and any one thing you can say about me, you can say about hundreds of thousands more people. Not to be fake deep, but personally I prefer authenticity over originality. I'd rather talk to someone boring who's being himself, than anyone who tries to be LOL SO INTERESTING. 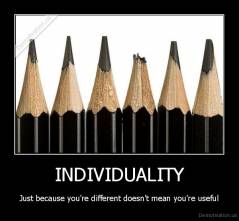 ^ extreme example of the kind of shit I hate